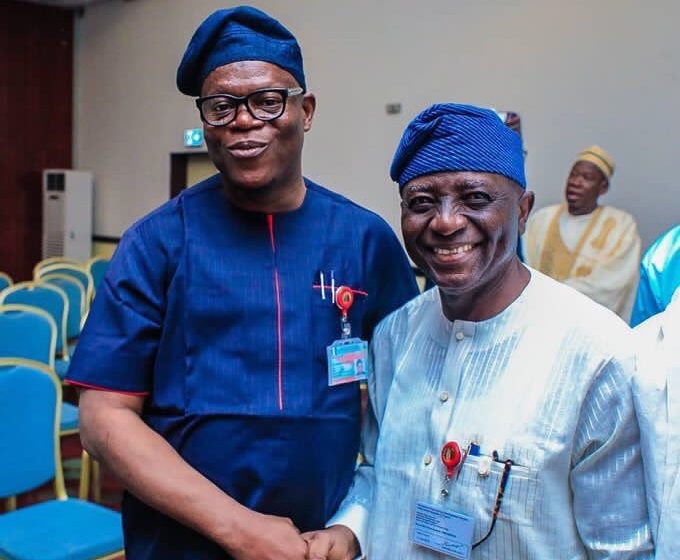 The Federal lawmakers from Osun State on the platform of the All Progressives Congress at the weekend upbraided their colleague in the People’s Democratic Party over his claim on the rising debt profile of the state.

Senator Francis Adenigba Fadaunsi representing PDP Osun East had last week raised the alarm that the state would soon be trapped in insolvency, against the backdrop of its huge debt which he put at over N170 billion. He claimed that Osun state currently ranked as the sixth most indebted state in Nigeria.

He further cautioned that additional loan which he claimed was being sought would mortgage the future of the state.

But at a press briefing at the weekend, the APC caucus from Osun State in the National Assembly led by Senator representing Osun Central Surajudeen Ajibola Basiru dismissed Senator Fadahunsi as an attention seeker who lacked the facts on the state of the finance of his state.

Flanked by Honourable Femi Fakeye and six others, Senator Basiru who could not give an accurate figure of both local and foreign debts owed by the state however claimed that there was no plan by Governor Gboyega Oyetola to seek fresh loans.

He further noted that previous loans were judiciously utilised as they were tied to feasible and visible projects.

He expressed concern why a senator incidentally from Osun state who spoke in defence of the external borrowing by the federal government could join forces to frustrate request for a loan by his home state.

He said: “We are rather surprised that Senator Fadahunsi who is representing the good people of Osun East Senatorial District in the Senate and thus an ambassador of the State of Osun in the National Assembly could go as low as he did with his laughable attempt at sabotaging the efforts of Governor Oyetola at harnessing resources for the immediate and long-term development of our dear state.

“It is indeed a parody that Senator Fadahunsi who supported the Federal Government’s request to borrow to fund critical projects has suddenly decided to constitute himself as a stumbling block to this home state’s quest to access and deploy resources in the face of the dwindling revenues.

“Senator Fadahunsi’s call is totally iII-conceived and an attempt to draw attention to himself and portray the State Government of Osun’s plans in a bad light.

“The Distinguished Senator needs to be schooled in the art of when to talk and when to refrain from doing so. To start with, the request for loans (if any) by Governor Gboyega Oyetola is not borrowing for a jamboree.

“The effect of Covid-19 on the global economy is enormous. In Nigeria, the crash in oil prices has resulted in a nosedive of government revenue projections that have adversely affected revenue allocation from the Federation Account.

“It is gratifying to note that Governor Gboyega Oyetola has not sat back and allowed the current economic crisis occasioned by Covid-19 pandemic to affect the capacity of the State Government to deliver on its onerous responsibilities, including improving the general welfare of the citizenry and placing the state on a sound financial footing.

“It was granted following the State’s Impressive performance under the Saving One Million Lives Programme for Result. The Central Bank (CBN) converted the amount about two years ago to Naira. At the time. the exchange rate was N305 to a dollar.

“To show transparency and accountability, the said amount is domiciled with the CBN. and releases are made only when they satisfy the World Bank procurement process.

“The fund has always been domiciled with the CBN and specifically meant to rehabilitate and revitalise the 332 Primary Healthcare Centres (PHCs), one per ward across the State on the basis of the survey and audit carried out by the Federal Ministry of Health in collaboration with the World Bank. Of the 332 PHCs earmarked for rehabilitation and revitalisation, the administration awarded 315 with 256 already fully equipped and functioning. In Fadahunsi’s ljesa area alone, the State Government have inaugurated 47 PHCs. Specifically, in Obokun Local Government Area where Distinguished Senator Fadaunsi comes from, five of the PHCs are up and running. ”

Senator Fadahunsi in a telephone interview, however, maintained that the APC federal lawmakers were being economical with the truth.

Senator Fadahunsi said the Osun State APC caucus lied when they said $20 million World was used to establish Primary Health Centres in all the wards in the state.

“The General Hospital we have in my town, Ilesha, is overgrown by weeds,

“They should spend this money judiciously to employ staff, give them drugs and let the place be functioning so that people will have a place to seek medical attention.

“As at June last year, my state (Osun) has secured N171 billion comprising N147 billion internal loan and N28billion external loans. As at today, Osun is number six debtor state in the country without anything to show for it. They still collect grants and monthly state allocations from FAAC. All other interventions from the Ecological Funds are there.

Then the debt relief that this present administration gave to them is there. Let them calculate it and what they have already borrowed and show us what they have done with it.

“We have already exceeded the target of borrowing by almost 20 per cent. The APC Senators from Osun know this.”