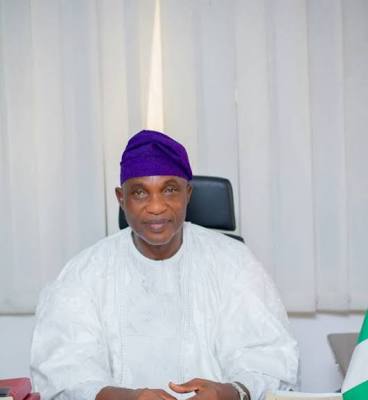 The former Secretary to the State Government of Osun, Alhaji Moshood Adeoti has formally returned to the All Progressives Congress (APC).

Adeoti left the party in 2018 when he resigned as a protest to the direct primaries of the APC in the build up to the governorship election.

The grassroots politician who announced his return to the ruling party at a press conference in his Campaign Office in Osogbo on Friday, said he made history with the Action Democratic Party (ADP).

According to him, making 49,742 votes despite having two months to prepare for the race denoted how the strength of internal democracy played out in the election.

He explained that the decision to re-join his former party was due to efforts from notable leaders of the APC in the state.

Adeoti said: “We made history in a way, in view of the number of votes (49,742) garnered, despite having barely less than two months to prepare for an election of such magnitude. No candidate in the political history of the state has ever neared that feat given that hard choice we made and environment we operated in.

“Since the said election was held, several political and opinion leaders in the progressive fold across the state and even beyond have been making numerous overtures and mounting pressure on my humble self and my numerous supporters on the need for our chickens to come home to roost.”

“The result of the efforts of the likes of the former governor and pioneer National Chairman of the APC, Chief Adebisi Akande, immediate-past governor of the state and incumbent Minister for Interior, Ogbeni Rauf Aregbesola and members of the State Elders Forum led by the former Secretary to the State Government, Chief Sola Akinwumi is what we are all witnessing today.

“It must not also go without particular mention the numerous efforts made by the current Governor of the State, Alhaji Gboyega Oyetola, who in spite of his very busy schedule, tirelessly mounted pressure on me and my supporters through telephone calls and personal visit to my residence in lwo, in company of the APC State Chairman, Prince Gboyega Famoodun and Alhaji Razak Salinsile, the state Secretary of the APC, on the need for us to return to the All Progressives Congress, where he said we rightly belong.”

The Iwo-born politician expressed optimism that his return to the APC will yield fruitful results for the party in successive elections.

Adeoti added that “However, our brief but eventful sojourn and investment in the ADP has yielded bountiful dividends, as founding members of the party, who we met on ground and had contributed in no small measure to the party’s sure-footing in the state, are here today to join us in our return to the All Progressives Congress. I believe that together, we still have so much to politically offer the state.”

“On a final note, I, Alhaji Moshood Olalekan Adeoti, hereby declare my membership of the All Progressives Congress (APC) and consequently direct all my teeming supporters across the state to do the same immediately.

“All my supporters are also enjoined to go to their individual wards in their respective Local Government Council Areas in the state to formally join the party, APC, and actively participate in all party activities.”

“We have been assured by the party leadership at the national and state levels that none of us would be reprimanded or discriminated against based on our past political efforts,” the former SSG noted.