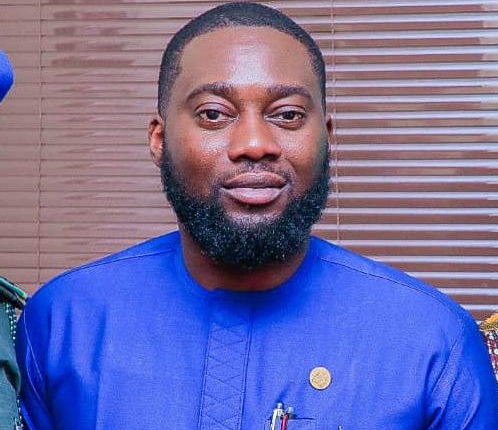 In his commitment to the development of youth and sports in the state, the son of the Governor of the State of Osun, Mr. Femi Oyetola has partnered with National Youth Service Corps (NYSC), Osun State Directorate during the ongoing orientation course for the new corps members in the state.

Fulfilling his promise, Mr. Femi Oyetola supported the inter platoon football competitions organised by Osun NYSC on Thursday at the scheme permanent site in Ede, where he presented Gold medals to the winners and also donated cash gifts to the first, second and third positions in football and Volleyball competition including the best footballer, volleyball player and best keeper.

Earlier in the final football match, platoon eight slugged it out with platoon four where both teams played a goalless draw in the first half of the match until the middle of the second half when platoon eight maneuvered their opponent and scored the only goal at the match which gave them the needed victory.

In his remarks, Mr. Kayode Dagiloke, who represented Femi Oyetola at the event described the competition as an awesome event, he commended both teams for putting in their best.

He said Femi Oyetola decided to partner with Osun NYSC in order to encourage sporting activities among the corp members and being a lover of sport too, he had no choice than to honour the NYSC invitation.

In his goodwill message, the Osun NYSC coordinator, Mr. Adegoke Adewale commended Femi Oyetola, he said he was impressed by his kind gesture and used the opportunity to call on well-meaning Nigerians especially those in the State of Osun to emulate him.

In his words, he said, “We really appreciate our brother, Femi Oyetola, who has done this, we expect other well-meaning Nigerians especially people in the State of Osun to emulate what our brother has done, he concluded.