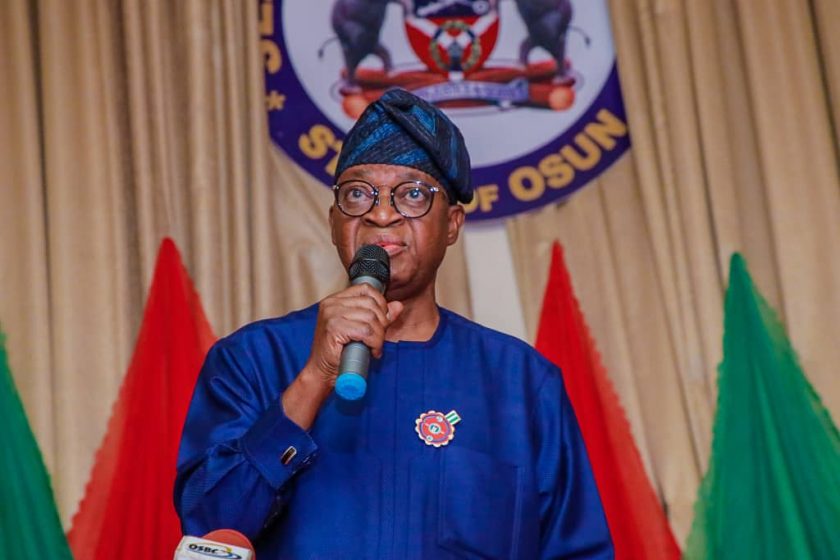 Osun State Governor Adegboyega Oyetola has signed the state’s Appropriation Bill for the year 2022 into law.

The governor reiterated his administration’s commitment to the provision of jobs and opportunities for the youth, delivery of more infrastructure and putting Osun on a surer footing.

Governor Oyetola, who announced that the 2021 budget as of the third quarter of this year had recorded 83.66 per cent performance, maintained that the race to achieving more in 2022 has begun as it remains a year of consolidation that will open the door for improved sustainable development.

He attributed the ‘appreciable performance’ of the budget to improved delivery of programmes and projects across the state during the year.

‘The government was able to achieve this year’s budget performance and service delivery through improved employment of creative, innovative and probity strategies, including efficient deployment of available resources, cutting costs and plugging wastes to deliver service in a sorely challenged economy,’ he said.

He disclosed his administration’s resolve to continue to follow time-tested principles for optimum results in 2022, saying: ‘With 56 per cent capital allocation and 44 per cent recurrent allocation in next year’s budget, we are obviously on the path of increased service delivery in 2022.’

While commending the spirit of harmonious relationship, cooperation and synergy among the three arms of government, particularly between the legislature and executive, Oyetola said: ‘In the last three years of working together as executive and legislative arms of government, we have demonstrated the unity of purpose, capacity and people-orientation in a manner that has delivered service to the people in line with our promise and the people’s expectations.’

He commended the leadership and members of the legislative arm for quickly passing the Appropriation Bills into law on a consistent basis since the inception of his administration.

‘These laudable acts of cooperation and support by the Assembly have, once again, showcased the Assembly as a people-oriented and development-focused house.’

In his remarks, the Speaker, Osun House of Assembly, Hon Timothy Owoeye, reiterated the house’s continued resolve to provide leadership that would smoothen governance and make life bearable and prosperous for the citizens through people-oriented legislation.